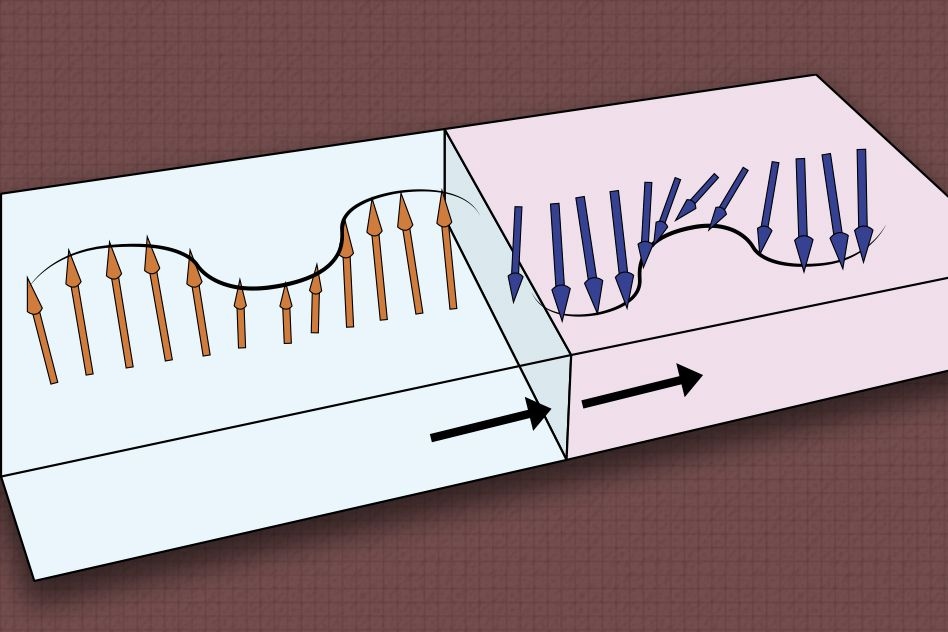 MIT researchers have devised a novel circuit design that enables precise control of computing with magnetic waves — with no electricity needed. The advance takes a step toward practical magnetic-based devices, which have the potential to compute far more efficiently than electronics.

Classical computers rely on massive amounts of electricity for computing and data storage, and generate a lot of wasted heat. In search of more efficient alternatives, researchers have started designing magnetic-based “spintronic” devices, which use relatively little electricity and generate practically no heat.

Spintronic devices leverage the “spin wave” — a quantum property of electrons — in magnetic materials with a lattice structure. This approach involves modulating the spin wave properties to produce some measurable output that can be correlated to computation. Until now, modulating spin waves has required injected electrical currents using bulky components that can cause signal noise and effectively negate any inherent performance gains.

The MIT researchers developed a circuit architecture that uses only a nanometer-wide domain wall in layered nanofilms of magnetic material to modulate a passing spin wave, without any extra components or electrical current. In turn, the spin wave can be tuned to control the location of the wall, as needed. This provides precise control of two changing spin wave states, which correspond to the 1s and 0s used in classical computing. A paper describing the circuit design was published today in Science.

In the future, pairs of spin waves could be fed into the circuit through dual channels, modulated for different properties, and combined to generate some measurable quantum interference — similar to how photon wave interference is used for quantum computing. Researchers hypothesize that such interference-based spintronic devices, like quantum computers, could execute highly complex tasks that conventional computers struggle with.

“People are beginning to look for computing beyond silicon. Wave computing is a promising alternative,” says Luqiao Liu, a professor in the Department of Electrical Engineering and Computer Science (EECS) and principal investigator of the Spintronic Material and Device Group in the Research Laboratory of Electronics. “By using this narrow domain wall, we can modulate the spin wave and create these two separate states, without any real energy costs. We just rely on spin waves and intrinsic magnetic material.”

Joining Liu on the paper are Jiahao Han, Pengxiang Zhang, and Justin T. Hou, three graduate students in the Spintronic Material and Device Group; and EECS postdoc Saima A. Siddiqui.

Spin waves are ripples of energy with small wavelengths. Chunks of the spin wave, which are essentially the collective spin of many electrons, are called magnons. While magnons are not true particles, like individual electrons, they can be measured similarly for computing applications.

In their work, the researchers utilized a customized “magnetic domain wall,” a nanometer-sized barrier between two neighboring magnetic structures. They layered a pattern of cobalt/nickel nanofilms — each a few atoms thick — with certain desirable magnetic properties that can handle a high volume of spin waves. Then they placed the wall in the middle of a magnetic material with a special lattice structure, and incorporated the system into a circuit.

On one side of the circuit, the researchers excited constant spin waves in the material. As the wave passes through the wall, its magnons immediately spin in the opposite direction: Magnons in the first region spin north, while those in the second region — past the wall — spin south. This causes the dramatic shift in the wave’s phase (angle) and slight decrease in magnitude (power).

In experiments, the researchers placed a separate antenna on the opposite side of the circuit, that detects and transmits an output signal. Results indicated that, at its output state, the phase of the input wave flipped 180 degrees. The wave’s magnitude — measured from highest to lowest peak — had also decreased by a significant amount.

By controlling the spin wave, they found they could control the position of the domain wall. This relies on a phenomenon called, “spin-transfer torque,” which is when spinning electrons essentially jolt a magnetic material to flip its magnetic orientation.

In the researchers’ work, they boosted the power of injected spin waves to induce a certain spin of the magnons. This actually draws the wall toward the boosted wave source. In doing so, the wall gets jammed under the antenna — effectively making it unable to modulate waves and ensuring uniform magnetization in this state.

Using a special magnetic microscope, they showed that this method causes a micrometer-size shift in the wall, which is enough to position it anywhere along the material block. Notably, the mechanism of magnon spin-transfer torque was proposed, but not demonstrated, a few years ago. “There was good reason to think this would happen,” Liu says. “But our experiments prove what will actually occur under these conditions.”

The whole circuit is like a water pipe, Liu says. The valve (domain wall) controls how the water (spin wave) flows through the pipe (material). “But you can also imagine making water pressure so high, it breaks the valve off and pushes it downstream,” Liu says. “If we apply a strong enough spin wave, we can move the position of domain wall — except it moves slightly upstream, not downstream.”

Such innovations could enable practical wave-based computing for specific tasks, such as the signal-processing technique, called “fast Fourier transform.” Next, the researchers hope to build a working wave circuit that can execute basic computations. Among other things, they have to optimize materials, reduce potential signal noise, and further study how fast they can switch between states by moving around the domain wall. “That’s next on our to-do list,” Liu says.

New material could be two superconductors in one | MIT News