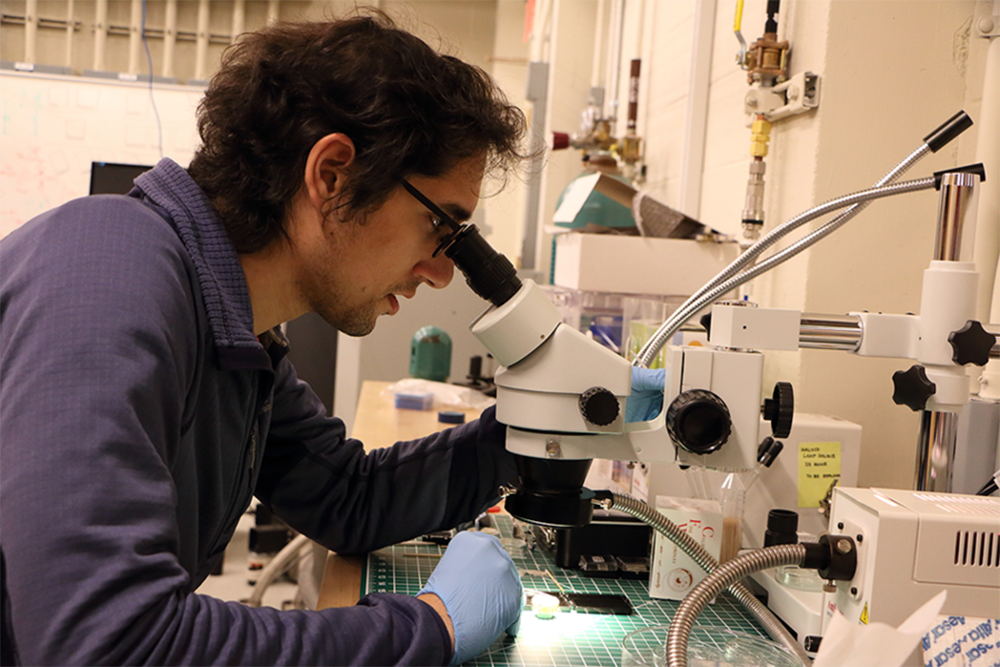 The work was reported in the Nov. 3 issue of the journal Nature.

The demonstration of finite momentum superconductivity in a layered crystal known a natural superlattice means that the material can be tweaked to create different patterns of superconductivity within the same sample. And that, in turn, could have implications for quantum computing and more.

The material is also expected to become an important tool for plumbing the secrets of unconventional superconductors. This may be useful for new quantum technologies. Designing such technologies is challenging, partly because the materials they are composed of can be difficult to study. The new material could simplify such research because, among other things, it is relatively easy to make.

“An important theme of our research is that new physics comes from new materials,” says Joseph Checkelsky, lead principal investigator of the work and the Mitsui Career Development Associate Professor of Physics. “Our initial report last year was of this new material. This new work reports the new physics.”

Checkelsky’s co-authors on the current paper include lead author Aravind Devarakonda PhD ’21, who is now at Columbia University. The work was a central part of Devarakonda’s thesis. Co-authors are Takehito Suzuki, a former research scientist at MIT now at Toho University in Japan; Shiang Fang, a postdoc in the MIT Department of Physics; Junbo Zhu, an MIT graduate student in physics; David Graf of the National High Magnetic Field Laboratory; Markus Kriener of the RIKEN Center for Emergent Matter Science in Japan; Liang Fu, an MIT associate professor of physics; and Efthimios Kaxiras of Harvard University.

Classical physics can be used to explain any number of phenomena that underlie our world — until things get exquisitely small. Subatomic particles like electrons and quarks behave differently, in ways that are still not fully understood. Enter quantum mechanics, the field that tries to explain their behavior and resulting effects.

Checkelsky and colleagues discovered a new quantum material, or one that manifests the exotic properties of quantum mechanics at a macroscopic scale. In this case, the material in question is a superconductor.

Checkelsky explains that fairly recently there has been a boom of realizing special superconductors that are two-dimensional, or only a few atomic layers thick. These new ultrathin superconductors are of interest in part because they are expected to give insights into superconductivity itself.

But there are challenges. For one, materials only a few atomic layers thick are themselves difficult to study because they are so delicate. Could there be another approach to plumbing their secrets?

The new material made by Checkelsky and colleagues can be thought of as the superconducting equivalent of a layer cake, where one layer is an ultrathin film of superconducting material, while the next is an ultrathin spacer layer that protects it. Stacking these layers one atop another results in a large crystal (this happens naturally when the constituent elements of sulfur, niobium, and barium are heated together). “And that macroscopic crystal, which I can hold in my hand, behaves like a 2D superconductor. It was very surprising,” Checkelsky says.

Many of the probes scientists use to study 2D superconductors are challenging to use on atomically thin materials. Because the new material is so large, “we now have many more tools [to characterize it],” Checkelsky says. In fact, for the work reported in the current paper the scientists used a technique that requires massive samples.

A superconductor carries charge in a special way. Instead of via one electron, charge is carried by two electrons bound together in what is known as a Cooper pair. Not all superconductors are the same, however. Some unusual forms of superconductivity can only appear when the Cooper pairs can move unimpeded through the material across relatively long distances. The longer the distance, the “cleaner” the material.

The Checkelsky team’s material is extremely clean. As a result, the physicists were excited to see if it might exhibit an unusual superconducting state, which it does. In the current paper the team shows that their new material is a finite momentum superconductor upon the application of a magnetic field. This particular kind of superconductivity, which was proposed in the 1960s, has remained a fascination to scientists.

While superconductivity is usually destroyed by modest magnetic fields, a finite momentum superconductor can persist further by forming a regular pattern of regions with lots of Cooper pairs and regions that have none. It turns out this kind of superconductor can be manipulated to form a variety of unusual patterns as Cooper pairs move between quantum mechanical orbits known as Landau levels. And that means, Checkelsky says, that scientists should now be able to create different patterns of superconductivity within the same material.

“This is a striking experiment which is able to demonstrate Cooper pairs moving between Landau levels in a superconductor, something that has never been observed before. Frankly, I never anticipated seeing this in a crystal you could hold in your hand, so this is very exciting. To observe this elusive effect, the authors had to perform painstaking, high-precision measurements on a uniquely two-dimensional superconductor that they had previously discovered. It’s a remarkable achievement, not only in its technical difficulty, but also in its cleverness,” says Kyle Shen, professor of physics at Cornell University. Shen was not involved in the study.

Further, the physicists realized that their material also has the ingredients for yet another exotic kind of superconductivity. Topological superconductivity involves the movement of charge along edges or boundaries. In this case, that charge could travel along the edges of each internal superconducting pattern.

“It’s been a lot of fun realizing this new material,” he concludes. “As we’ve dug into understanding what it can do, there have been a number of surprises. It’s really exciting when new things come out that we don’t expect.”

This work was supported by the Gordon and Betty Moore Foundation, the Office of Naval Research, the U.S. Department of Energy (DOE) Office of Science, the National Science Foundation (NSF), and the Rutgers Center for Materials Theory.

Computations were performed at Harvard University. Other parts of the work were performed at the National High Magnetic Field Laboratory, which is supported by the NSF, the State of Florida, and Department of Energy.

Can a quantum strategy help bring down the house? | MIT News