Carbon nanotubes are one of science’s best kept secrets. These tiny, man-made materials boast extraordinary properties – they are the darkest material humans can create, they absorb light so well they can produce thermal energy, and they’re able to mimic nature to help the body fight bacteria.

Researchers in Australia and China have found a cheaper, easier way to organise large groups of carbon nanotubes, potentially opening up many new avenues for their use by more scientists around the world.

Carbon nanotubes are usually grown on the surface of a material using a chemical process involving a carbon source and nanoscale metal catalysts, such as iron, nickel, and cobalt.

A glow-discharge plasma is used to grow the nanotubes vertically and free-standing to form a nanoscopic forest.

Lithography is justifiable in highly sophisticated industries like microelectronics but more affordable alternatives are needed for large scale, lower-tech applications.

Now, scientists have demonstrated an alternative for assembling and aligning powerful collections of carbon nanotubes without the need for lithography.

Dr Eser Akinoglu said: “We want to use the carbon nanotubes to coat medical implants and mimic the antibacterial properties of insect wings, to have a mechanical structure that can kill bacteria and hopefully at the same time promote the growth of the bone cells (osteoblasts).

“The major idea is to mimic the structures on insect wings that kill bacteria through mechanical action, with no antibiotic chemicals involved.”

The researchers relied on a ‘dewetting’ process to organise nickel catalyst particles in a particular way. Dewetting is when fluid, in this case a molten metal, is retracted from a surface.

Metal islands then form when heat is applied to a thin metal film on a layer of silica nanospheres, which acts as a template to create an exact arrangement of nanoscale nickel islands.

The diameter of the silica particles determines the ‘pitch’ of the hexagonal nanotube arrangement, while thickness of the metal film influences the width of the nickel islands, which in turn determines of how wide the eventual carbon nanotubes are.

Finally, the length of the nanotubes is simply decided by how long they are allowed to grow for.

By taking this approach, all the geometric parameters of the nanotubes can be chosen without the need for expensive lithography.

“Normally you would need to use lithography to make a template,” Eser said.

“This could be with light, X-rays or electron beams.

“What we do here eliminates the need for all that. It’s a much easier way to grow these carbon nanotubes in periodic, predefined patterns.

“It’s the first time that periodic arrays of carbon nanotubes have been grown without a lithographic step.”

The resulting carbon nanotubes repel water and resemble similar structures found in nature, which means they could help to create biomimetic devices – tools that solve complex problems by mimicking things found in the natural world.

Just one example is the ‘lotus effect’, in which a plant’s capacity to self-clean is determined by the nanostructures within its leaves.

The researchers will now attempt to discover if the carbon nanotube arrays can indeed kill the bacteria that threaten medical implants.

The team is based across South China Normal University, the ARC Centre of Excellence in Exciton Science and the Doherty Institute at the University of Melbourne. Their research has been published in the journal Nanotechnology and is available here. 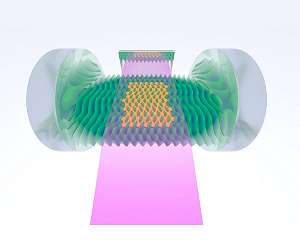 
When sound was first incorporated into movies in the 1920s, it opened up new possibilities for filmmakers such as music and spoken dialogue. Physicists may be on the verge of a similar revolution, thanks to a new device developed at Stanford University that promises to bring an audio dimension to previously silent quantum science experiments.

In particular, it could bring sound to a common quantum science setup known as an optical lattice, which uses a crisscrossing mesh of laser beams to arrange … read more