It is an intuitive rule of thumb: if you reduce the density of a material, its stiffness will also be reduced. But scientists from the Lawrence Livermore National Laboratory in the US noticed that materials that are based on sandwich nanotubes retained their stiffness at lower densities.

Modelling by materials scientists from the University of Groningen (The Netherlands) revealed how this could happen. In a paper published on 25 October in Nature Materials, the two groups showed how to design lightweight but very stiff porous materials.

The collaboration started during a coffee break at a conference, where scientists from the Lawrence Livermore National Laboratory showed their preliminary experimental results on porous materials that were made using 3D printing.

A polymer was used to print a log pile structure, with tubes stacked perpendicularly, at a sub-micrometre scale. The material was then coated with nickel, and the polymer was pyrolyzed. The carbon from the polymer created nanotubes on the inside and on the outside of the nickel layer. After removing the metal, the carbon sandwich tubes remained, in the log pile configuration.

‘The fascinating aspect of their results was that the material retained almost all of its stiffness when the tubes were created with more space between them,’ explains Patrick Onck, Professor of Micromechanics at the Zernike Institute for Advanced Materials at the University of Groningen, in the Netherlands. Studying the deformation behaviour of nanomaterials using experimental techniques is very difficult, but Onck and his research group are renowned for their ability to study materials using computer modelling.

Onck first set a Bachelor’s student to work to create an initial theoretical model, and then a PhD student to study the carbon tubes using finite element modelling. It was observed that when the polymer tubes were spaced further apart, the mass distribution of carbon changed.

‘During pyrolysis, carbon diffuses through the nickel layer to create the outer tube. When the tubes are further apart, more carbon moves to the outside, creating a thicker outer tube.’ Furthermore, the two parts of the double carbon tubes are linked by struts, mimicking the sandwich tube structure of grass stems. Onck: ‘Our models showed that the struts are vital for the stiffness of the material.’

Thus, the modelling of these tubes revealed why they retain their stiffness at lower densities. Now that the secret of ultralight stiff nanotubes is known, and the mechanism is understood, it will be possible to design new materials.

‘The technique of creating double tube carbon structures can also be applied to lattice materials. In these materials, the polymer beams are organized in a mechanically more favourable configuration,’ says Onck. ‘Now that we understand the mechanics, we can optimize these materials in silico.’

High-end 3D printers are required to make these materials. So, they will not be used in mass-produced items. ‘However, we do believe that industrial production of specialist applications will be possible in the near future,’ says Onck.

The porous materials can be applied in micro-electromechanical systems (MEMS) and other small devices. ‘The kind of materials that we have described would also be useful in the production of batteries, or other applications that require a large surface area, such as catalysts, or heat exchangers.’ 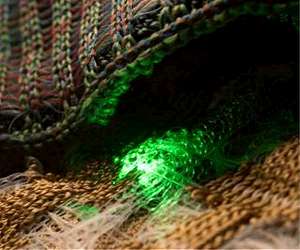 
The Air Force Research Laboratory is working to increase availability of rare nanomaterials and strengthen U.S. scientific and manufacturing ties with India.
Nanomaterials are thin – about 1/100,000th of the thickness of a human hair.
AFRL and its partners are harnessing nanomaterials’ unique optical, magnetic, electrical, and other properties for improved optoelectronics, quantum devices, high-temperature coatings, thermal management, and more.
But a lack of scalable nano manufacturin … read more