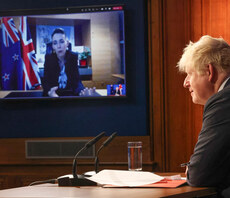 The government continues to insist maintaining high environmental protection, animal welfare, and food standards in the UK “will be a red line in all our trade negotiations”, as it yesterday launched a new “strengthened” Trade and Agriculture Commission that it said would help inform ratification of any future agreements.

However, the announcement faced immediate pushback from environmental groups and opposition MPs who argue the proposals are far from strong enough to support the UK’s climate and environmental ambitions, while British farmers continued to voice concerns at the prospect of being undercut by food producers in other markets with less stringent environmental and animal welfare standards.

The new Commission, which was first announced last year, is tasked with providing expert scrutiny of new trade deals “once they reach the signature stage” to help “ensure world-leading British agricultural standards are upheld”, according to the Department for International Trade (DIT).

It said the 12 industry and expert figures on the Commission, which is to be chaired by University of Cambridge international law professor Lorand Bartels, would have a formal role to inform MPs and the public about how new free trade deals are consistent with UK green laws.

Other members of the Commission boast expertise across the agricultural, food production, veterinary, animal welfare, environment, and international trade policy sectors, among others, DIT said.

The government said their advice would inform a report laid before Parliament ahead of the ratification of any free trade deals, and following the signature stage. It insisted it was going “further than ever before to work with trading partners” to ensure strong environmental standards are maintained.

In addition, the government also unveiled further measures to support farmers, including setting up a new Food and Drink Export Council, and a new cohort of “agri-food attachés” who it said would work to promote export opportunities for UK farms and producers worldwide.

It follows a raft of recommendations from the previous iteration of the Trade and Agriculture Commission back in March, which International Trade Secretary Anne-Marie Trevelyan described as “thorough and wide-reaching”.

“I want our farmers and food producers to be positive about the export opportunities that exist and take advantage of booming demand for British exports,” she said.

Yet severe misgivings about the role and strength of the Commission continue to be voiced by green groups, farmers, and the Labour Party, with campaigners raising concerns about the government’s failure to deliver a formal UK trade strategy or put into law its commitments to green trade. The latest developments come in the wake of the controversial free trade deal struck with Australia earlier this year, which was roundly criticised by industry and campaign groups alike for setting a precedent that could leave the door open to the UK market being flooded with products made to less stringent environmental and animal welfare standards. Criticism of the deal was further stoked last month, when it emerged the UK government had agreed to water down specific mentions to climate change in the agreement at the behest of Australian negotiators.

Sarah Williams, who heads up the Greener UK coalition of 12 groups campaigning for a ‘green Brexit’, warned there were still “big questions remaining over transparency, standards, strategy and engagement” with regards to the government’s latest plans for the Commission.

“We hope that hosting COP26 spurs the Prime Minister to realise that warm words don’t cut it,” she said. “The deal in principle with Australia will see an increase in food imports produced to lower standards, including from deforested land. The UK is unlikely to sign trade agreements that advance issues like animal welfare and pesticide use until the government establishes a set of core environmental standards and an actual strategy.”

President of the National Farmers Union (NFU), Minette Batters, also said the latest announcements from the government lacked concrete commitments and practical, deliverable measures aimed at safeguarding UK environmental and animal welfare standards. “Where is the commitment to establish a clear set of core standards on which to base our free trade agreements – something farmers and the British public alike want to see?” she asked, while also querying the length of time taken to set out its plans for the new Commission, given two deals with Australia and New Zealand have already been broadly agreed with the UK.

“The government has missed the opportunity to make these new trade deals fit for the 21st century by ensuring food imports will meet the high animal welfare and environmental standards legally required of our own farmers and desired by the public,” she said. “Instead of repeating the refrain that these deals will be good for British agriculture, our government now needs to explain how these deals will tangibly benefit farming, the future of food production and the high standards that go along with it on these shores.”

Labour’s Shadow Trade Secretary Emily Thornbury, claimed the trade deals agreed with New Zealand and Australia would “damage jobs and growth in our farming communities, undercut the competitiveness of our farmers, and undermine the standards they are required to maintain”.

“In other words, these deals are exactly what the Trade and Agriculture Commission was set up to prevent, if the government would only let them do their job,” she said. “Our farming communities were repeatedly promised last year that the TAC would act as their voice when assessing the government’s trade deals, but those promises have today been broken.”

The latest free trade negotiations come as the government’s flagship Environment Bill moves closer towards becoming law, with the legislation – which sets out plans for legally-binding environmental targets overseen by a new Office for Environment Protection watchdog – expected to receive Royal Assent in the coming weeks.

Green groups have long argued the explicit commitments to upholding green standards in trade deals should be included in the Environment Bill, and that vice-versa, free trade deals should explicitly back the UK domestic environental targets set out in the legislation.

In related news, the government’s latest annual assessment was published today, detailing varying levels of progress against a host of green targets and indicators set out in its 25 Year Environment Plan. While key pieces of legislation such as the Agriculture Bill and Fisheries Bill have moved into law, and efforts continue to finalise targets underpinning the Environment Bill, the report highlights ongoing battles to improve biodiversity, reduce air pollution, and move towards more efficient resource use.

Progress on tackling air pollutants such as fine particles, ammonia and non-methane volatile organic compounds is stalling, while the abundance of key UK ‘priority’ species is still on a downward trend, and pollinator species are failing to increase or are even doing backwards, the report stated. Moreover, recycling rates and the number of serious water pollution incidents are failing to show much improvement, it states.

The report concedes that not all green indicators and targets “are heading in the right direction with some areas of significant concern”. “We recognise that more needs to be done – both domestically and internationally – if we are to deliver a nature positive future,” the report states. “As the Dasgupta Review emphasised, a failure to engage conscientiously with the natural world has led nature to the point of crisis. The scale of action is huge and requires long term concerted action to halt the decline.”

Environmental campaigners and farmers will argue that efforts to accelerate this sluggish progress are in no way helped by trade deals that could require British producers to compete with imports that are produced to lower environmental standards. The government has spent much of the past few years insisting green standards will not be compromised, but key stakeholders remain entirely unconvinced by such assurances.