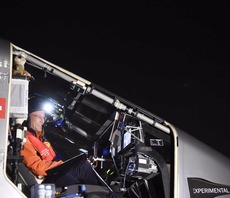 Airlines should already be running as net zero emissions businesses, using a combination of energy efficient processes and carbon offsets to achieve their climate goals, according to the first man to circumnavigate the world in a solar-powered aeroplane.

Speaking as part of the Net Zero Festival today, Solar Impulse’s founder, pilot, and chairman, Bertrand Piccard, also predicted clean aviation technologies would become a widespread reality by the middle of the next decade.

“Today, [the aviation industry] can be 20 per cent more efficient… and there is still 80 per cent to be saved,” he observed. “[This] needs to be offset for every passenger. They could be carbon neutral today.”

He added that there were a number of avenues available that could slash aviation emissions, ranging from on board batteries, to hydrogen fuel cells, biofuels, or synthetic kerosene.

“The revolution is on,” he added.

The past few years have seen a host of developers undertake electric test flights with small aircraft, while major aerospace companies are working on new hybrid aircraft and fuel cell based designs that promise to slash emissions. At the same time, major airlines are stepping up demand for so-called Sustainable Aviation Fuels, which use captures carbon dioxide or organic feedstocks to produce low carbon fuels.

Piccard, whose Efficient Solution Label initiative has now identified 1,260 cutting edge solutions from around the world thatpromise to increase energy and resource efficiency, also rejected the idea economies need to choose between the protection of the environment and the quality of life provided by modern society. Instead, Piccard argues a “third way” forward, dubbed ‘qualitative growth’.

“We have to show that protecting the environment, fighting climate change [and] stopping pollution is something that can be exciting and profitable,” he added.

You can still sign up to attend the Net Zero Festival and catch all the sessions on demand here.