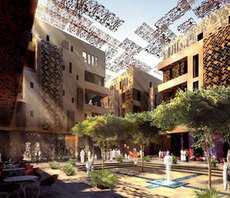 With under a month to go until the COP26 Climate Summit in Glasgow the meeting received a triple boost this week, as the UAE, Turkey, and South Korea all announced new net zero targets.

First up the UAE became the first Gulf State to formally adopt a net zero target, pledging to deliver a carbon neutral economy by 2050.

Sheikh Mohammed bin Rashid Al Maktoum, the oil-producing nation’s leader, declared this week that the country had adopted a goal to reach net zero by 2050. “Our development model will take into account this goal and all institutions will work as one team to achieve it,” he said, adding that the country would invest 600bn dirhams ($163bn) in “clean and renewable” energy through to 2050.

The new target represents a significant strengthening on the UAE previous goal of reducing its emissions 23.5 per cent by 2030, compared to a business-as-usual baseline and to get 50 per cent of its electricity from renewables and nuclear by 2050.

South Korea already has a net zero target in place, but the government this week moved to significantly strengthen its interim emissions goal for 2030, ratcheting the target upwards from a 26.3 per cent cut against 2018 levels to a 20 per cent cut.

The government said the revised target, which will be submitted to the UN through the country’s nationally determined contribution (NDC), should put the economy on track to meet its goal of delivering net zero emissions by 2050. “Considering the projected rate of annual reduction, the 40 percent goal is a very bold aim compared to other nations,” the government said in a statement.

And in a further boost to hopes the Glasgow Climate Summit can deliver a series of breakthroughs, Turkey’s parliament this week formally ratified the Paris Agreement just a day after the country’s cabinet announced a new target to achieve net zero emissions by 2053.

The move means just five countries have yet to ratify the agreement – Iran, Iraq, Eritrea, Libya and Yemen.

Turkey had delayed ratifying the agreement in protest at its classification at the UN climate talks as an industrialised nation. The government has long argued the coal-reliant economy should be regarded as a developing nation and have access to international climate finance pledged under the Paris Agreement.

Climate Home News reported that in ratifying the treaty the lawmakers also approved a declaration alongside the text of the Paris climate treaty, which unilaterally declared that Turkey would implement the accord “as a developing country”.

The move could spark a row at the UN climate negotiations, but diplomats this week broadly welcomed the news that another major emerging economy has publicly committed to achieving net zero emissions.

In a surprise move, reports this week suggested the Russian government could come to the Glasgow Summit with a significantly strengthened climate strategy.

The Kommersant newspaper reported on Wednesday that officials had drafted a new decarbonisation strategy that sets a 2060 net zero emissions target and includes a raft of new measures to slash emissions across the carbon intensive economy.

Under the new strategy Russia would aim to cut carbon emissions by 79 per cent by 2050 under an “intensive” scenario that serves as the base case for the plan, according to Kommersant.

The strategy is yet to be approved by Cabinet and President Vladimir Putin has a long history of embracing climate sceptic talking points and refusing to scale up clean tech infrastructure.

However, the new plan will fuel hopes that the government is starting to consider how to respond to escalating climate impacts and a projected long term decline in oil and gas demand.

Tesla to move HQ, as GM powers up battery plans

Tesla is set to move its headquarters from Silicon Valley’s Palo Alto to Austin, Texas, where it is building a massive car and battery manufacturing complex.

Chief executive Elon Musk told the company’s annual meeting yesterday, “I’m excited to announce that we’re moving our headquarters to Austin, Texas”. However, he stressed that “this is not a matter of, sort of, Tesla leaving California”, adding that the company planned to increase output from its main California factory and Nevada factory by 50 per cent, alongside its new Texan facility.

The news comes in the same week as rival auto giant GM announced it is to build a huge new electric vehicle battery lab in Michigan as it looks to cut battery costs by 60 per cent and extend range to over 500 miles on a single charge. The company said the lab would be operational by mid-to-late next year and would house hundreds of engineers.

India’s coal power giant NTPC Ltd. is looking to raise $2bn through three separate IPOs for different divisions at the company, according to reports.

The IPOs would come from the company’s renewables, hydropower, and power trading arms, as it looks to fund its pivot towards green energy.

US Climate Envoy John Kerry confirmed this week that Egypt had already been selected as the nominee to host the COP27 Climate Summit next year.

Africa is due to host the next Summit and last month Egypt’s President Abdel Fattah al-Sisi officially declared his country’s interest in hosting the meeting.

The venue is set to be confirmed at the Glasgow Summit next month, but Egypt now looks set to be in the box seat to secure the role as host.

“The objective of the plant is to demonstrate the performance, economics, and operability of the capture technology at scale,” the companies said. “Following this the partners will seek to establish a framework for the technology’s implementation in Holcim’s further cement plants in Germany.”

Initial tests are scheduled to commence in the first quarter of 2022, with the first phase of the project expected to capture 5,600 tonnes per annum of CO2. The hope is that the final phase of the project would capture over 90 per cent of the carbon dioxide emissions from the Höver plant and deliver the CO2 in high-purity liquid form for use or sequestration.

A new report from the Institute for Economics and Peace (IEP) think-tank has this week warned that climate change is set to further exacerbate an existing vicious cycle whereby the depletion of natural resources fuels violent conflicts.

The report, titled Ecological Threat Register, identifies 30 “hotspot” countries that are home to 1.26 billion people that are deemed to be most at risks of ecologically-driven conflict based on eight indicators relating to resource scarcity and the threat posed by natural disasters such as floods, droughts, and rising temperatures.

“We don’t even need climate change to see potential system collapse, just the impact of those eight ecological threats can lead to this – of course climate change is reinforcing it,” he said.