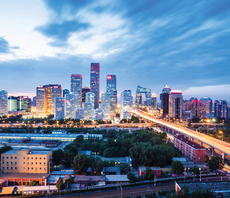 On the eve of COP26, the weekly Global Briefing reports on the latest NDCs, Austrian ‘Klimatickets’, and fresh corporate efforts to curb deforestation

China’s top climate diplomats arrived in the UK this week ahead of the start of the COP26 Climate Summit as the country formally submitted its updated national climate action plan, or Nationally Determined Contribution (NDC) in the UN jargon.

The long-awaited document contained few surprises, but the plans did put President Xi Jinping’s pledge to deliver a ‘carbon neutral’ economy by 2060 on a formal footing. The strategy also strengthens the previous goal of ensuring emissions peak “around” 2030 with the new phrasing committing to peaking emissions “before 2030”.

The submission was welcomed in some quarters as further evidence that China remains fully committed to the UN climate negotiations and accelerating efforts to transition towards net zero emissions. However, some campaigners also argued the country had missed an opportunity to deliver bolder near term action to further accelerate decarbonisation efforts this decade, fuelling fears of a stand off between China and the US at COP26, which could see each of the two economic superpowers accusing the other of not doing enough to curb emissions.

“In light of the domestic economic uncertainties, the country appears hesitant to embrace stronger near term targets, and missed an opportunity to demonstrate ambition,” Shuo added. “The planet can’t afford this being the last word. Beijing needs to come up with stronger implementation plans to ensure an emission peak before 2025. China’s choice epitomizes the lack of determination to step up action among major economies. It reflects Beijing’s mistrust of the US ability to fulfill its carbon and finance targets. There’s real fear that Washington’s empty words will intensify an unfair global climate order.”

Meanwhile, the Biden administration has fuelled hopes that it could yet arrive in Glasgow with a major down payment on its plans to deliver net zero emissions by 2050, having unveiled a revised version of its infrastructure bill that would still deliver over $500bn of climate-related spending.

The White House yesterday released a revised reconciliation framework for its ‘Build Back Better Bill, stressing that the legislation was still dominated by action on climate change, despite the apparent removal of previous provisions to introduce a Clean Electricity Performance Program (CEPP).

The CEPP, which would have incentivised energy companies to accelerate the switch to cleaner sources of power, appears to have been axed in the face of implacable opposition from Democrat Senator Joe Manchin, who thanks to the Democrats slender Senate majority effectively has a casting vote on the legislation.

However, while climate spending has been trimmed in the reconciliation bill compared to the $3.5tr bill proposed in the summer the cuts are much lower than in other areas.

According to a fact sheet released by the White House, the new bill would feature $320bn of clean energy tax credits, which would apply to a wide range of clean technologies including power transmission and storage, manufacturing, and vehicles, $105bn for environmental resilience measures, and a further $130bn for renewable energy development and procurement.

Speaking at an event this week, White House Chief of Staff Ron Klain said the administration has “a proposal in the reconciliation bill, in the Build Back Better bill, to make a historic investment in climate change”.

“More than $500bn over 10 years,” he added. “Just to put that in perspective, the entire Department of Energy over the next 10 years is going to spend $450bn. We’re talking about an investment in climate change larger than the entire Department of Energy. We just now have to go get that done. I think we’re making a lot of progress in that regard.”

However, it remains to be seen if other governments gathering in Glasgow are convinced that the package is ambitious enough to put the US on track to meet Biden’s medium term emissions targets and can be passed without further dilution.

The Austrian government has this week launched its new ‘Klimaticket’, offering citzens full access to all public transport for just €3 a day in a move designed to help slash transport emissions.

Introduced by Green Party ‘superminister’ Leonore Gewessler, the new ‘Klimaticket’ costs €1,095 for an annual pass, but then allows users to access the entirety of the country’s train, bus, and tram network.

“I think you can see how happy I am,” Gewessler said at the launch of the deal, according to comments reported by CNN. “This is a big day for the climate and for transport. If this summer has shown us anything, it is that the climate crisis has already arrived with us.”

Investors can now lawfully file resolutions to drive corporate climate action in most European countries, according to new research by ClientEarth that analyses 13 national legal frameworks for climate shareholder engagement across the continent.

Supported by the Institutional Investors Group on Climate Change (IIGCC), ClientEarth’s report attempts to demystify the legal labyrinth that has obstructed climate-related resolutions, and provides a roadmap for investors to file proposals in several key jurisdictions.

Lawyers concluded that there was a legal avenue to file – or ‘requisition’ – climate-related resolutions in all but one of the frameworks analysed, with pathways available in major economies such as France, Germany, Italy, Spain, and the UK.

“Investors are waking up to the magnitude of climate risk and are increasingly using their powers as a force for good, to compel corporate climate action,” said ClientEarth lawyer Paul Benson. “But investor engagement on climate can get stuck, either becoming a siloed conversation between shareholders and Investor Relations teams, or bogged down in insubstantial corporate commitments. Resolutions can break through. With this guide, shareholders can now act with confidence and make full use of this tool as a potent driver of change at companies that have such a critical role in the net-zero transition.”

A consortium led by Ireland’s Mainstream Renewable Power has secured contracts to develop 1.27GW of new wind and solar power capacity in South Africa, having been awarded 50 per cent of the total allocation in the latest round of the country’s Renewable Energy Independent Power Producer Procurement Programme (REIPPPP).

The company said the win makes it the leading renewable energy company in South Africa, with over 2.1GW of capacity awarded under the REIPPPP to date. The 12 new projects are set generate enough clean energy to power a third of the annual electricity demand of the City of Cape Town.

“We are delighted to be chosen to contribute further to the decarbonisation of South Africa,” said Hein Reyneke, Mainstream’s General Manager for Africa. “It is a demonstration of faith in Mainstream’s track record of efficient and reliable delivery not only here in South Africa but also internationally, where we are currently building ten wind and solar PV projects simultaneously, totalling 1.35GW in Chile. Our latest win will deliver enormous social, economic and environmental benefits for South Africa.”

Olam food ingredients has this week announced that it is working with partners Mondelēz International, Partnerships for Forests (P4F), and The Nature Conservancy (TNC) to scale up efforts to halt deforestation and restore degraded land in Pará, Brazil, as part of a project that aims to help bring 48,000 hectares of land under sustainable management by 2023.

Deforestation rates in Pará are the highest of any Brazilian state wuth 1.2 million hectares of forest have been lost in the last five years alone, mainly as forest is cleared to make way for cattle farming. Together, the partners are aiming to tackle deforestation by promoting cocoa agroforestry – where cocoa is grown alongside native trees and fruits – as a more profitable alternative to ranching. The large-scale project aims to restore lost tree cover and help farmers to diversify and grow their livelihoods. It is also intended to encourage other industry players to replicate the model and help accelerate efforts to halt deforestation.

The project is an expansion of a successful first phase which recently won Nature-Based Project of the Year at the Business Green Leaders Awards 2021. More than 250 farmers have already signed a zero-deforestation agreement, 16,000 hectares of land have been brought under sustainable management, and 1.6 million Brazilian reais of subsidized credit have been unlocked for implementation and management of agroforestry, Olam said. The next phase of the project will now scale up further to cover 700 farmers and 48,000 hectares of land by 2023.

In related news, Brazil’s Vice President Hamilton Mourao announced this week that the government plans to bring forward its 2030 goal of ending illegal deforestation by two or three years.

The comments will fuel hopes that Brazil could yet strengthen its national climate action plan at next week’s COP26 Climate Summit. But environmental campaigners and other governments remain deeply sceptical about environmental pronouncements from President Jair Bolsonaro’s administration, with critics fearing he could yet seek to block any breakthrough at the Glasgow Summit following repeated complaints that industrialised nations are seeking to undermine the sovereignty of tropical forest nations.

A new international solar project, dubbed the One Sun, One World, One Grid (OSOWOG) initiative, is set to formally launch at COP26 and will be fully operational by Autumn 2022.

Speaking to the Telegraph, director general of the International Solar Alliance, Dr Ajay Mathur, revealed OSOWOG would aim to connect 140 countries and will be spearheaded by India and the UK.

The initiative aims to share best practices between countries so as to expand solar capacity and then allow cross-border transmission of solar power at scale, so as to help nations curb their reliance on fossil fuels while maintaining energy security and grid reliability.