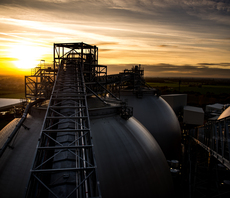 Drax is aiming to source 80 per cent of the construction materials and services for its novel bioenergy with carbon capture and storage (BECCS) technology from the UK, in a move it claims could create thousands of jobs and unlock millions of pounds of contracts for UK businesses.

The energy firm is aiming to become a ‘carbon negative’ company by the end of the decade, largely through the use of CCS on its biomass energy plants which it claims could help to remove more CO2 from the atmosphere than is produced as a result of burning the biomass for energy.

Drax has been piloting BECCS systems at its North Yorkshire power plant, where it hopes to begin constructing the final carbon capture system in earnest from 2024, with a community consultation over the plans earmarked to begin this autumn.

The company them hopes to have the first BECCS system fully up and running in 2027 followed by a second in 2030, and during the construction phase it has this week committed to ensuring 80 per cent of the materials and services – including steel, pipes and heat pumps – for the project are sourced from within the UK.

Building BECCS could offer hundreds of millions of pounds worth of contracts to British businesses and create over 10,000 jobs across the Humber tidal estuary on the north east coast, in addition to helping decarbonise one of the UK’s most carbon intensive regions, according to the firm,

“BECCS will play a vital role in enabling the UK to reach its legally binding net zero target, as well as saving the energy system billions of pounds in the process,” said Will Gardiner, Drax Group CEO. “Our ambition is to put the UK supply chain at the heart of delivering this crucial climate saving technology and by doing so we’ll create and protect thousands of new jobs, kickstart new industries and help level up the UK.”

However, some green groups have continued to raise concerns over Drax’s plans for BECCS, arguing that the project is heavily reliant on unsustainable forests in North America, and that the climate benefits of the technology have been overstated – claims which have been fiercely denied by the company.

The BECCS technology is currently being piloted at Drax Power Station in North Yorkshire, which has gradually been converted over the past decade from running on coal power to instead using biomass as its feedstock, a transition the company claims has reduced the power plant’s emissions by over 90 per cent, while also supplying five per cent of the UK’s electricity needs.