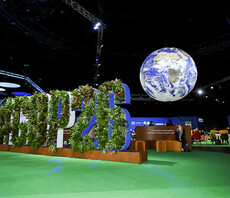 IEA estimates flurry of net zero commitments put 1.8C of warming within reach, but other projections are less optimistic and many contentious issues remain far from resolved as the Glasgow Summit nears its halfway point

The wave of fresh climate commitments and net zero targets announced by world leaders in Glasgow this week could well have edged the planet onto a warming pathway that is just about compatible with the temperature goals of the Paris Agreement, according to the International Energy Agency (IEA).

Yet as crunch negotiations head towards their mid-point in Glasgow, a separate UN analysis of the progress made at COP26 has underscored the huge shortfall in promised action this decade that must be addressed if the chances of a 1.5C global warming pathway are to be kept alive.

In snap analysis published yesterday, the IEA said it had calculated the impacts of the net zero pledges and emissions targets announced in recent days, and concluded that if national climate pledges are delivered as promised, the planet could potentially limit warming to 1.8C by the end of the century and arguably remain in line with the Paris Agreement target of keeping temperature increases ‘well below’ 2C.

The findings further fuelled the cautiously optimistic mood that has built up during the first week of talks at COP26, which has seen a raft of new net zero pledges from emerging economies and a series of global deals to increase flows of climate finance, better protect forests, accelerate clean tech deployment, and curb methane emissions.

If accurate, the IEA’s analysis marks a staggering sea change in the outlook for planetary warming over just the past fortnight, with estimates based on commitments made prior to COP26 this week previously suggesting the planet was on track for 2.7C of warming by the end of the century.

With a number of major economies, including India, Vietnam, Thailand, Australia, Saudi Arabia, and others, having set their sights on delivering net zero emissions, in addition to improved emissions targets for 2030 from many other nations, the outlook within the past month appears to have dramatically improved.

The wave of new short and long term emissions pledges, on top of the commitment from a large coalition of nations and businesses this week to slash methane emissions by 30 per cent by 2030, means temperature increases could be limited to 1.8C, according to the IEA.

Sharing the snap analysis this morning, the IEA’s executive director Fatih Birol hailed the huge progress made in Glasgow in helping to push the world closer towards the realising the ambitions of the Paris Agreement.

New @IEA analysis shows that fully achieving all net zero pledges to date & the Global Methane Pledge by those who signed it would limit global warming to 1.8 C

A big step forward, but much more needed!

However, observers were quick to stress that the new projections were entirely dependent on governments now delivering on their decarbonisation promises, with experts stressing there was little detail to back up many of the new net zero commitments. The UK’s COP26 presidency has also sought to emphasise that the focus of the talks in Glasgow should be on trying to keep temperature increases below 1.5C given scientists have made clear that warming much above that threshold could lead to very dangerous impacts for societies and economies.

Moreover, questions remain over whether countries will move quickly enough to cut emissions this decade, with experts warning a failure to so could push temperatures well beyond the IEA’s projections. These concerns were underscored by a sobering analysis released late last night by the UN, which indicates that the sum total of current 2030 emissions reduction targets promised by countries would still see global emissions increase by 13.7 per cent on 2010 levels by the end of the decade, putting the chances of limiting average temperature rise to 1.5C by the end of the century far out of reach.

Experts warned the only way the projection set out by the IEA would come to pass is if the various countries making long term net zero pledges translate their targets into rapid efforts to slash emissions this decade. A separate analysis just yesterday from a group of leading climate scientists warned global emissions were once again rising fast in the wake of the year of Covid-related lockdowns and as such the remaining carbon budget for keeping temperature increases below 1.5C could be burned through within just 11 years at the current rate of annual emissions.

The flurry of eye-catching commitments from the Summit this week on coal phase outs, overseas fossil fuel financing, deforestation pledges, and financial backing for the net zero transition prompted Mohamed Adow, a veteran of UN climate talks and director of climate and energy think tank Power Shift Africa, to warn COP26 was in danger of “drowning in an announcement blitz”.

The many pre-planned announcements run the risk of distracting from the nitty-gritty of the Paris Agreement talks themselves, for which progress is critical, he argued.

#COP26Glasgow is in danger of drowning the UNFCCC in announcement blitz. These announcements may generate headlines but assessing their true worth is hugely difficult, especially at speed during a COP meeting. They are eye candy but the sugar rush they provide are empty calories

However, the IEA’s analysis nevertheless helped crystallise a cautiously positive mood in Glasgow, where crunch talks over a raft of contentious issues have begun ramping up in earnest over the past two days, after most world leaders left the city on Tuesday and passed the negotiating mantle onto their diplomats.

Discussions are ongoing over delivery of richer nations’ promised $100bn climate finance for developing nations, and how to increase funding for adaptation and loss and damage measures. Meanwhile, hopes remain high that the long impasse over aspects of the Paris Agreement ‘rulebook’ governing carbon markets can be overcome before the end of the Summit.

In a note released late yesterday, the UK’s COP Presidency said it planned to hold a stock-take of how negotiations are going on Saturday evening, with an aim to avoid too many unresolved issues spilling into next week.

Getting a handle on precisely how negotiations are playing out is arguably tougher than usual, with Covid-19 rules restricting the number of civil society observers in negotiating rooms, prompting criticism that is likely to get louder as talks progress next week – particularly in the wake of climate protests in Glasgow at the weekend that are expected to attract hundreds of thousands of demonstrators.

But COP26 President Alok Sharma stressed that he remained committed to keeping the talks on track so as to ensure a swift conclusion to the Summit next Friday. “My expectation is that very few issues remain open by the evening of Wednesday 10 November, when near-final texts will be presented,” his update reads. “My priority for Thursday 11 November will be to bring matters together and resolve final outstanding issues, leaving time for document preparation.”

Seasoned observers of UN Summits indicated that the proposed timetable was likely to prove optimistic, given the historic track record of negotiations spilling well past their scheduled end time.

Moreover, there have been signs this week of potential key battle lines being drawnm between the various camps in the negotiations.

The UK’s COP Presidency’s assessment of the opening few days of the Summit stressed that the event had so far demonstrated that world leaders had “sent a clear signal that COP26 must keep 1.5C in reach”. Indeed, the demands of the influential High Ambition Coalition of nations – which now includes the US – seem to broadly align with those of several other groupings at the talks, such as the Climate Vulnerable Forum, with a clear focus on ensuring countries update their climate action plans as soon as possible to move the world on to a 1.5C warming trajectory.

But while 1.5C is the most stretching and optimal climate scenario from a scientific point of view, politically it still has its challenges, with China and others having long warned that a faster and more demanding decarbonisation pathway could hamper development for emerging economies.

As such, China’s climate envoy Xie Zhenhuan, this week pushed back against efforts to try to focus the talks on the 1.5C goal. “If we only focus on 1.5, we are destroying consensus and many countries would demand a reopening of the negotiations,” he told the BBC.

Another crucial issue that has long resulted in stalemate at UN climate talks relates to the rules governing international carbon markets and the trade in offset credits set out in Article 6 of the Paris Agreement.

Some nations including Brazil and Russia have been seeking to allow for carbon credits secured under the previous Kyoto Protocol carbon market regime to be transferred into the new framework, while others, including the EU remain determined to ensure robust rules avoid any ‘double counting’ of pre-existing carbon credits.

The latest negotiating texts on Article 6 released late last night suggest only slow progress is being made towards an agreement, provide, but also provide a slither of hope that a deal remains possible, with one of the texts up for negotiation explicitly ruling out the carry-over of credits from Kyoto Protocol regime.

Gilles Dufrasne, policy officer at Carbon Market Watch, told BusinessGreen there appeared to be a greater willingness to find common ground on the issue than at the talks in Madrid two years’ ago, which ended in a stalemate.

“All the options are still on the table,” he said. “It is far from clear we will get an agreement, but they are going in the right direction.”

As crunch talks spill over into the weekend following a week of headline-grabbing announcements, green businesses, civil society groups, and climate diplomacy experts appear united in expressing a carefully guarded hopes that a significant agreement could yet be brokered.

“I think the phrase many are using, including us, is that we are looking at the talks with cautious optimism,” Helena Bennet, senior policy adviser at the think tank Green Alliance, told BusinessGreen, as she hailed the IEA’s new projections that the planet could move on to a 1.8C warming pathway as “really quite staggering”.

“I think a lot of us came into this with not very high hopes, and it’s been better than we thought so far,” she said, pointing to the various net zero commitments, enhanced 2030 targets, and announcements on curbing coal and fossil fuel finance.

“But of course, there is still at this stage not enough of what we would like to see, which is strict, robust action,” Bennet added. “The reason we’re using the phrase ‘cautious optimism’ is largely because we’ve seen big pledges before that haven’t necessarily been seen through. So ensuring that there are really transparent, robust plans for all of these big pledges and announcements is really crucial to making sure that we are actually on track.”