A research group at the Norwegian University of Science and Technology (NTNU) has developed a method for making an ultra-high material efficient solar cell using semiconductor nanowires. If this is placed on top of a traditional silicon-based solar cell, it could potentially double the efficiency of today’s Si solar cells at low cost.

“We have a new method of using gallium arsenide (GaAs) material in a very effective way through nanostructuring, so we can make solar cells much more efficient using only a tiny fraction of the material that is normally used,” says Anjan Mukherjee, a PhD candidate at the Department of Electronic Systems.

Mukherjee is the main developer of the technique.Gallium arsenide (GaAs) is the best material for making high efficiency solar cells because of its extraordinary light absorption and electrical characteristics. It is commonly used to make solar panels mainly for use in space.

However, high-quality GaAs solar cell components are quite expensive to make, which has driven a demand for techniques that can cut the use of the material.

In recent years,researchers have realized that a nanowire structure can potentially enhance solar cell efficiency compared to standard planar solar cells, even as the approach uses less material.

“Our research group has found a new way to make an ultrahigh power-per-weight ratio solar cell that is more than 10 times more efficient than any other solar cell, by using GaAs in a nanowire structure,” says Helge Weman, a professor at the Department of Electronic Systems at NTNU.

GaAs solar cells are most often grown on a thick and expensive GaAs substrate, which leaves little room for reducing costs.

“Our method uses a vertically standing semiconductor nanowire array structure on a cheap and industry-favorable Si platform to grow the nanowires,” Weman said.

“The most cost-effective and efficient solution is to grow a dual tandem cell, with a GaAs nanowire cell on the top grown on a bottom Si cell, which avoids the use of an expensive GaAs substrate. We have worked to minimize the cost of growing the top GaAs nanowire cell, because it’s the GaAs fabrication cost that is one of the major issues that is currently holding back the technology,” Weman explains.

“The tiny footprint of the nanowire structure provides an additional benefit, because it allows for high quality in crystals in the nanowire and in the interface with the silicon. This helps improve the solar cell performance,” said Bjorn-Ove Fimland, a professor in the same department.

The development of this technology can be straightforward and cost-effective with appropriate investments and industrial-scale R and D projects.

“We grow the nanowires using a method called MBE (molecular beam epitaxy), which is not a tool that can produce materials at a high volume. However, it’s possible to produce these nanowire-based solar cells at a large scale by using an industrial-scale tool such as MOCVD (metal organic vapor deposition),” Mukherjee said.

Integrating this product on top of a Si cell can potentially improve solar cell efficiency to as much as 40 % – which would mean a doubling of efficiency when compared to today’s commercial Si solar cells.

The researchers say their approach could be adapted so that the nanowires are grown on different substrates, which could open the door to many other applications.

“We are exploring growing this type of light-weight nanowire structure on atomically thin two-dimensional substrates such as graphene. This could open up enormous opportunities to produce light-weight and flexible solar cells that can be used in self-powered drones, micro-satellites and other space applications,” Mukherjee said.

The group’s research has been published in ACS Photonics, a journal from the American Chemical Society.

Norwegian University of Science and Technology 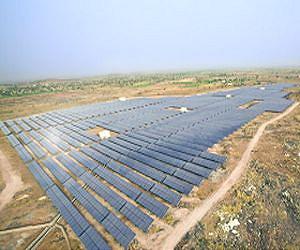 
As camels munch on the fringes of Thar desert, an oasis of blue solar panels stretches further than the eye can see at Bhadla Park – a cornerstone of India’s bid to become a clean energy powerhouse.

Currently, coal powers 70 percent of the nation’s electricity generation, but Indian Prime Minister Narendra Modi has pledged that by 2030, India will produce more energy through solar and other renewables than its entire grid now.